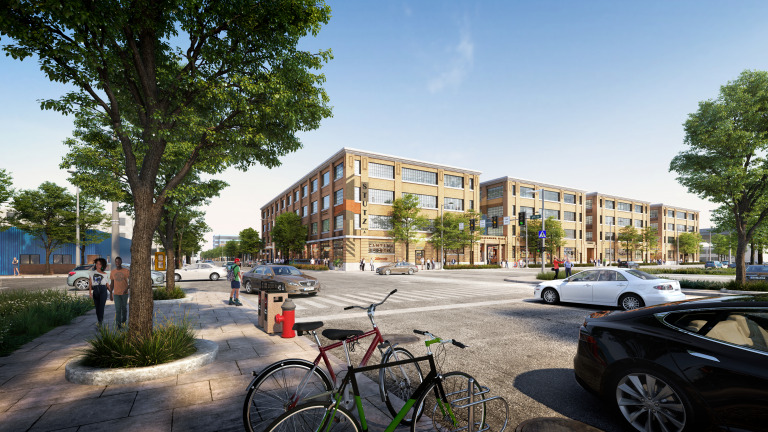 The company behind the ongoing $100 million overhaul of The Stutz campus on downtown’s north side is also planning a mixed-use project one block to the south that will include about 270 apartment units, plus office and retail space.

New York City-based SomeraRoad Inc. has submitted plans to city officials for Stutz South, a five-story mixed-use development that would occupy most of the block between West Ninth and 10th streets and Capitol Avenue and Roanoke Street.

As planned, Stutz South would incorporate property owned by an affiliate of construction contractor Shiel Sexton Co. Inc. on the south end of the block, including the firm’s three-story headquarters at 902 N. Capitol Ave. Shiel Sexton would remain in the building and also occupy office space immediately to the north in the Stutz South project.

IBJ reported in December that SomeraRoad was in the predevelopment phase of planning hundreds of apartment units adjacent to The Stutz at 1060 N. Capitol Ave. The plans submitted to the city for Stutz South now provide concrete details for at least one residential development.

SomeraRoad’s goal is to start construction on Stutz South by the end of 2023, Donchez said. The project would take about two years to complete. The firm doesn’t yet have an estimate for the cost of the project, Donchez said.

SomeraRoad is scheduled to present plans for the project on Jan. 26 at a meeting of the Indianapolis Regional Center Hearing Examiner, which maintains development standards for downtown projects. If approved by the hearing examiner, Stutz South also would require approval from the Indianapolis Metropolitan Development Commission.

Stutz South would offer about 270 apartments, split between studio, one-bedroom and two-bedroom units. The project would include 398 parking spaces, spread out over all five floors of the complex but ensconced in the interior of the complex’s southern end. It also would have a landscaped, open-air courtyard at the core of its northern end.

The project’s 9,500 square feet of office space will be located on street level along Capitol Avenue. The development also would offer two spaces for retailers along 10th Street at the corners of Capital and Roanoke totaling about 4,300 square feet.