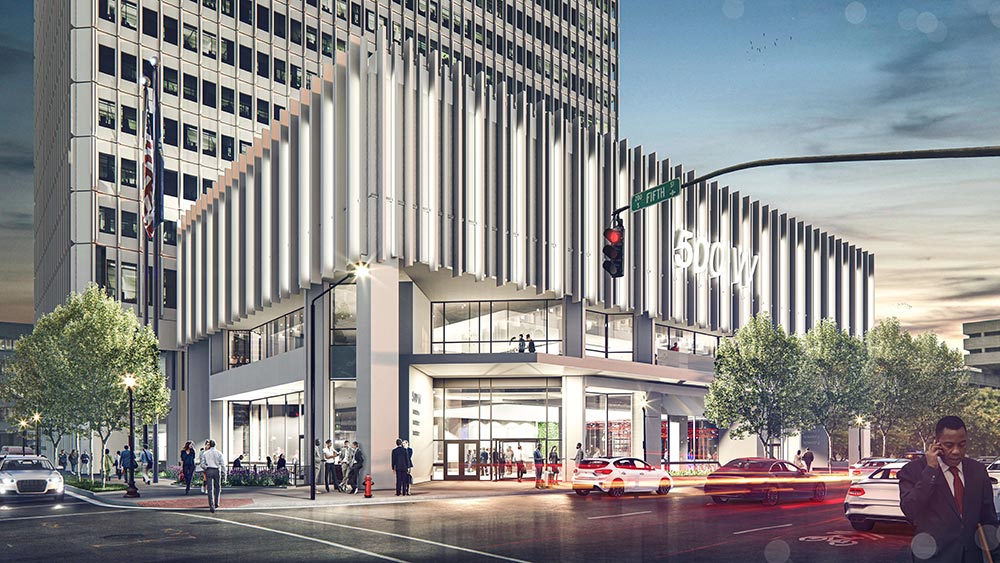 EXCLUSIVE: Check out these new, animated renderings of a $16M Downtown tower renovation

Construction is progressing on one of Louisville’s largest office towers.

Nashville, Tennessee-based SomeraRoad is in the process of renovating the 29-story Downtown office tower at 500 W. Jefferson St., known as 500W. I reported in December the company is investing $16 million in the renovation.

The project will modernize the interior and exterior of the tower.

A news release said it will feature an expansive new lobby with a primary entrance on Jefferson Street, enhancing the area’s pedestrian friendliness and embracing Louisville Metro Hall and Jefferson Square Park.

Andrew Marchetti, vice president in SomeraRoad’s Nashville headquarters, said in an email the firm will start delivering several components of the project in July.

SomeraRoad is also converting 500W’s entire fourth floor into a marquee tenant amenity floor. On the floor will be a tenant lounge and cocktail bar, including private bourbon lockers, casual gathering areas and event spaces.

These features will extend outdoors onto Louisville’s largest green-scaped rooftop terrace. Tenants can use the outdoor seating areas, meeting spaces and event spaces on the terrace, and it will be fully accessible to tenants for cocktail events, casual luncheons and other activities.

The fourth floor also will include a fitness center, featuring Peloton Bikes, treadmills, a yoga and pilates studio, free weights, training machines, locker rooms and showers. Lastly, the release said it’ll have a best-in-class conferencing center, with private conference rooms and board rooms for groups of varying sizes, as well as a 50-person corporate training room for large company functions.

A few tenants have extended their lease agreements to remain in the building. Lynch, Cox, Gilman & Goodman PSC, a Louisville law firm, has signed a long-term lease extension to remain in its 19,000-square-foot space, filling up the entire 21st floor.

“The ongoing construction that will reimagine 500W made our firm’s decision to commit to the building long-term an easy one to make,” Scott Spiegel, president of Lynch Cox said in a press release. “We are determined to be part of the betterment of Downtown and SomeraRoad’s investment provides yet another reason to join in this effort.”